Blog - Latest News
You are here: Home / news / Construction Sector Grew 1% in May

Real GDP in Canada increased 0.2 per cent in May following growth of 0.3 per cent the previous month and 0.5 per cent in March. In May, there were gains in 13 of the 20 industrial sectors.  Goods-producing industries were up for a third consecutive month with a 0.6 per cent increase after a steady decline from Q3 2018. Service-producing industries were up 0.1 per cent. Compared to May 2018, the Canadian economy is 1.4 per cent larger with an annualized value of $1,965 billion (chained 2012 dollars) in May 2019. 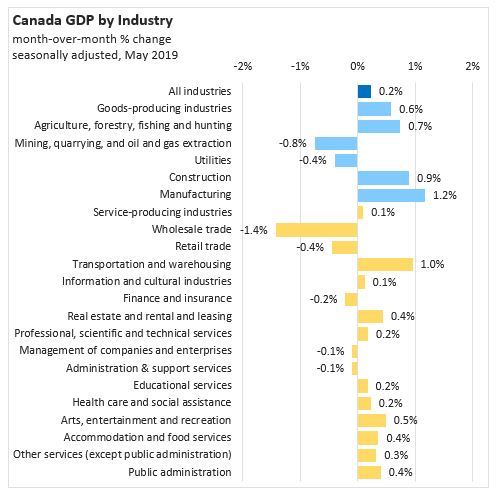 Mining, quarrying and oil and gas extraction declined 0.8 per cent after a strong increase last month. Oil sands extraction was down after facilities scaled up production last month to take advantage of eased production restrictions. Mining was up for third consecutive month with growth in metal ore mining and non-metallic mineral mining. Coal mining was up after three months of decline on higher exports of metallurgical coal to oversea markets.

With a decline of 0.4 per cent, retail trade had its first consecutive monthly decline since June and July 2018. Retail subsectors were evenly split with a decline in food and beverage stores and less favourable weather conditions slowing sales in clothing and general merchandise stores. Gasoline stations posted a 2.6 per cent increase in activity.

Wholesale trade declined 1.4 per cent after four consecutive monthly gains as all subsectors except building material and supplies contracted in the month. Notable declines were for wholesalers of motor vehicles and parts, machinery, equipment and supplies, and agricultural/miscellaneous.

Public sector GDP was up 0.3 per cent with increases in education, health care and public administration.

Comparing the size of the Canadian economy in January-May 2019 with January-May 2018, there has been a 1.4 per cent increase due to higher service sector output (+2.3 per cent) while the goods-producing sector declined by 1.0 per cent. Higher levels of activity in agriculture, forestry, fishing and hunting, utilities and manufacturing only partially offset the lower levels of activity in mining, quarrying, and oil and gas extraction and construction. Service sector output is higher across all subsectors with the largest increases in professional, scientific and technical services, administration and support services, and accommodations and food services subsectors.