In cooperation with Indigenous organizations, the Government of Canada chose June 21, the summer solstice, for National Aboriginal Day, now known as National Indigenous Peoples Day. For generations, many Indigenous peoples and communities have celebrated their culture and heritage on or near this day due to the significance of the summer solstice as the longest day of the year.

CANS acknowledges that our organization and membership operate in Mi’kma’ki, the ancestral and unceded territory of the Mi’kmaq People. This territory is covered by the “Treaties of Peace and Friendship” which the Mi’kmaq and Wolastoqiyik (Maliseet) Peoples first signed with the British Crown in 1725. The treaties did not deal with surrender of lands and resources but in fact recognized the Mi’kmaq and Wolastoqiyik (Maliseet) title and established the rules for what was to be an ongoing relationship. We are all treaty people.

Who are Canada’s Indigenous Peoples?

The Canadian Constitution recognizes three groups, First Nations, Inuit and Métis peoples as Aboriginal peoples — also known as Indigenous peoples. Although these groups share many similarities, they each have their own distinct heritage, language, cultural practices and spiritual beliefs.

To help all Canadians understand these three groups a little better, the Government of Canada has created an index of resources about each group. To explore the history, languages, cultures, and experiences of Indigenous Peoples across Canada, please visit: https://www.rcaanc-cirnac.gc.ca/eng/1621447127773/1621447157184

“The Mi’kmaq are the founding people of Nova Scotia and remain the predominant Aboriginal group within the province. When the Mi’kmaq first encountered Europeans in the 16th and 17th centuries, their territory stretched from the southern portions of the Gaspé Peninsula eastward to most of modern-day New Brunswick, and all of Nova Scotia and Prince Edward Island.

“This area was divided into seven smaller territories across what was known as Mi’kma’ki. Today, the Mi’kmaq live throughout the province. Nova Scotia has 13 Mi’kmaq First Nations with community populations ranging from 283 in the Annapolis Valley First Nation to 4,314 in the Eskasoni First Nation.” Click here to learn more via the Office of L’nu Affairs. 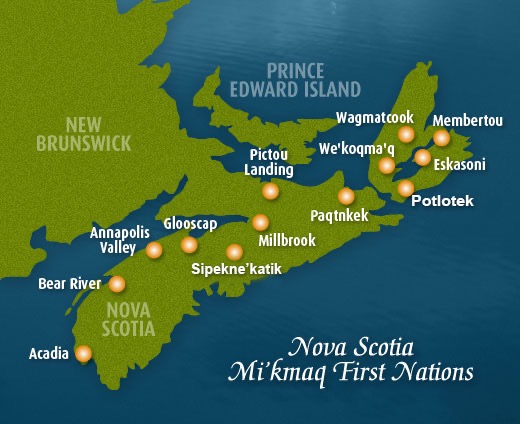 Credit: the Office of L’nu Affairs

Announced May 2022, the federal government is giving the Mi’kmaw Native Friendship Centre nearly $5 million to build their new facility at 1940 Gottingen Street, the site of the former Red Cross Building.

The next step will be working with the city to secure the Gottingen Street property through a land transfer agreement. The centre is currently in a three-year lease at a temporary space on Brunswick Street as their Gottingen location was deemed unsafe.

The centre services and supports 7,000 Indigenous people a year and runs 55 programs.

Follow this Project in CANS Pipeline! Subscribe to updates on this project and find information about open tenders when they become available. Use Pipeline Connection: PL22-0128NS – Mi’kmaw Native Friendship Centre to Build New Facility in Halifax.